Handgun Basics—4 Easy Steps to Shoot Like A Pro

Follow these 4 simple steps to master all the handgun shooting basics. 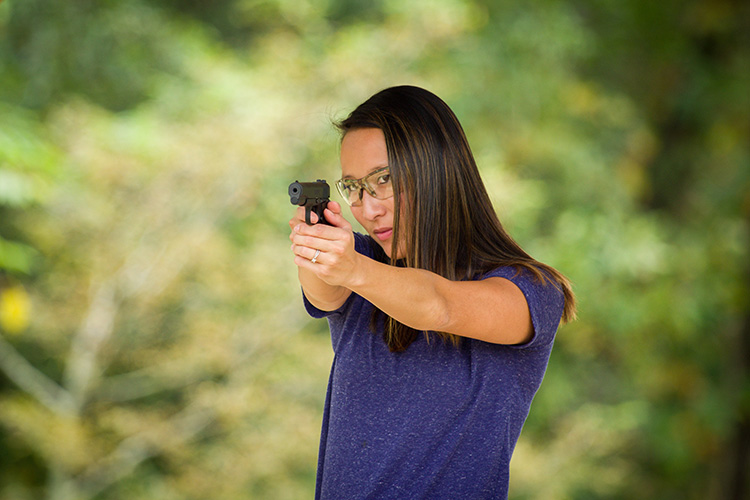 The handgun is the toughest of the three primary firearms to master. Rifles and shotguns are fired from the shoulder, which provides a more stable platform, but a handgun is fired while hanging out there on the end of those noodles we call arms. Once you’ve chosen the handgun that’s right for you, learning to shoot a handgun well requires that we develop a very different skill set. Master these four basics and you’ll be on your way to shooting like a pro.

1. How to Grip Your Handgun Properly 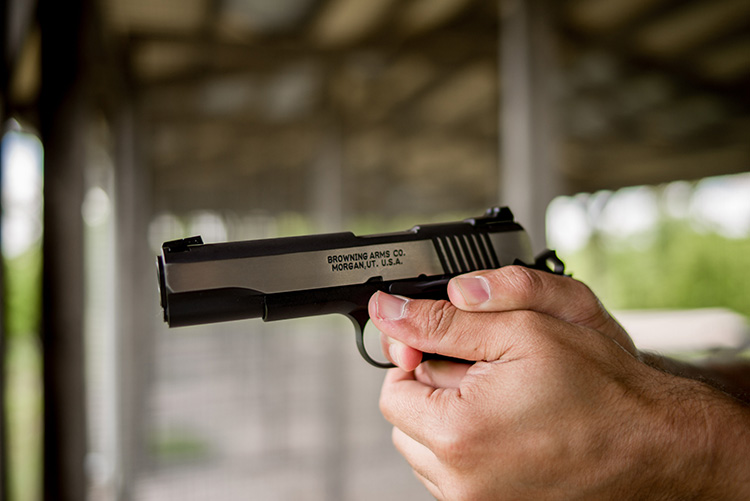 Photograph Courtesy of Howard Communications
On autoloaders, the proper grip uses two hands. Both thumbs are pointed forward with the strong-hand thumb on top of the weak hand.

For semi-auto handguns, the most common grip style today utilizes two hands with both thumbs pointed forward with the strong-hand thumb on top.

It’s important to grip the handgun as high as possible. The closer the axis of the bore is to your hand; the less muzzle flip you will experience under recoil. I was watching a television show recently where the super-secret-agent ninja girl was gripping her handgun by the bottom of the grip. It was a huge give-away that she really didn’t have a clue about how to shoot a handgun and probably really wasn’t a secret agent. . . or a ninja.

Another big Hollywood mistake is when the actor “teacups” the gun with the support hand. That is placing the hand under the grip like he is holding a cup of tea.

Grip By The Numbers

1. The correct way is to place your primary hand as high as allowed on the grip. Most handguns will have a beaver tail or curve of some sort to help position the web of your hand. If not, be aware that the slide will come back over your hand. If you are too high it can cut your delicate flesh, which will cause blood to leak all over your new gun and probably make you say a lot of bad words.

2. The grip should fit in your hand so that when you are pointing the handgun the barrel is in line with the bones of your forearm. Your thumb will point forward and lie along the side of the handgun.

3. Wrap your support hand around your strong hand. Position it as high on the gun as the trigger guard will allow.

4. The joints where your fingers attached to your hand should be over the mid-finger knuckles of the strong hand.

5. Both thumbs should point forward, strong hand thumb on top.

6. The strong hand should push out while the support hand pulls back to help stabilize the handgun.

There are a few variations of course, but this is by far the dominant style of shooting a semi-auto pistol today.

Many revolver shooters like to cross their support hand thumb over the top of the strong hand thumb. The best double-action revolver shooter in the world, Jerry Miculek, told me that’s how he does it and you can’t argue with his success.

There are two basic stances in use today, the Weaver Stance and the Isosceles Stance. Which one is best has sparked endless arguments with shooters. Perhaps the best advice is to try both and see which stance feels most comfortable to you. Here are simple instructions to get you started on both.

Weaver Stance
The Weaver stance was invented by Jack Weaver back in the early days of the development of what Jeff Cooper would name the modern technique of pistol shooting.

In the Weaver stance:

1. The feet are in a boxing stance, shoulder width apart, slightly angled to the target.

2. The support side foot is forward.

3. The strong side foot is angled out to approximately forty-five degrees to the side.

4. The front knee is slightly bent and the rear leg nearly straight. Weight distribution is about 60/40 with most of the weight on the forward foot.

5. The torso will be leaning forward at the hips and twisted slightly to align the shoulders with the forward foot.

6. The strong side arm is extended with the elbow slightly bent.

7. The support side elbow is noticeably bent pointing down.

This stance is promoted by many defensive shooting instructors, but it is losing favor in recent years as the Isosceles is becoming more dominant with the top shooters.

Photograph Courtesy of Glock, Inc.
In the classic Weaver stance, the shooter takes more of a boxer’s stance with support foot forward and the weight on the balls of your feet. Note how the support elbow is bent down.

1. The feet are shoulder width apart with the support side foot slightly forward.

3. The shooter leans forward so the shoulders are forward of the hips and the weight is on the balls of their feet.

4. Both arms are held straight, locking the elbows. Viewed from above, the arms and chest of the shooter form an isosceles triangle, which gives the stance its name.

This stance is favored by most competition shooters in the action shooting sports. It has also gained some favor with defensive shooters for law enforcement and military as it keeps the shooter’s body armor pointed at the threat.

One huge advantage to the Isosceles stance is that it allows the shooter to move to other targets in either direction with speed and precision. For multiple-target situations, it is the favored stance.

Photograph Courtesy of Glock, Inc.
In the Isosceles stance the shooter faces the target straight on. Knees are slightly bent, and the arms are extended straight out in front toward the target. 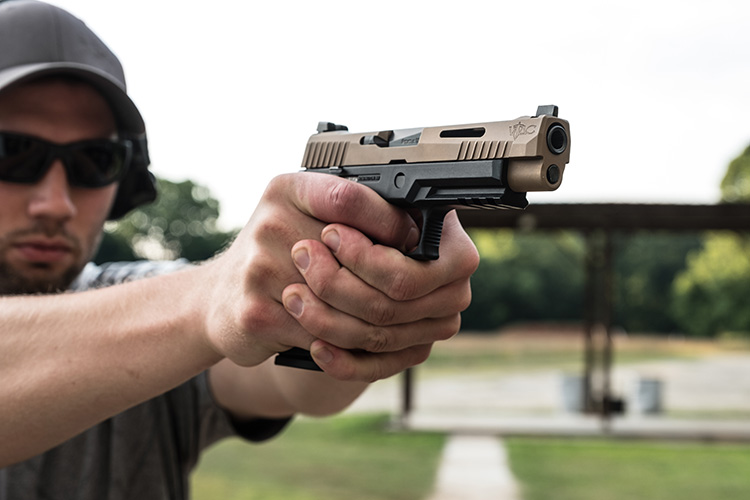 Photograph Courtesy of SIG Sauer
Trigger control is important for accurate shooting. The trigger finger should rest on the trigger in the center of the last pad on the finger—not at the joint and never on the very tip of the finger.

The trigger is everything with a handgun, including the source of most shooting problems.

1. The trigger finger should rest on the trigger in the center of the last pad on the finger, never at the joint and never on the very tip of the finger.

2. All movement should be from the center knuckle of the finger and never from the knuckle where the finger attaches to the hand.

3. The key is to apply increasing pressure to the trigger while you keep the sights aligned and on target, until the gun fires. If you try to jerk the trigger as the sights wobble by the target, you will miss.

Many instructors say that the shot should surprise you. That’s fine when you are learning. However, as you progress you will master control of the trigger so the handgun fires precisely when you want it to fire. 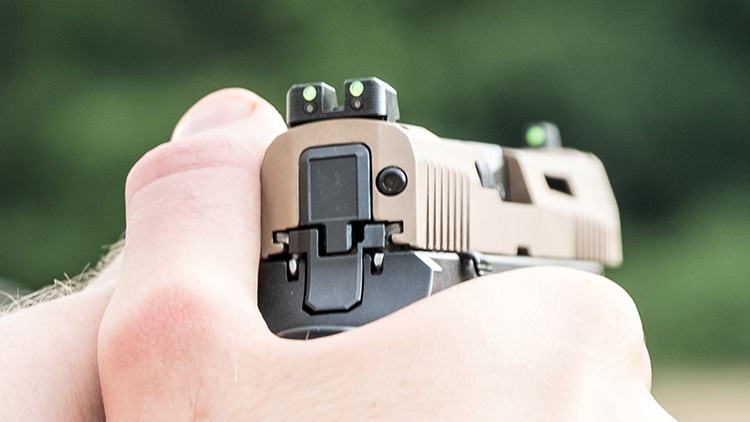 Photograph Courtesy of SIG Sauer
You can never eliminate all of the wobble when aiming a handgun. The trick to keeping the sights aligned is to practice making the cone of the wobble smaller while trying to keep it on the target.

The key to shooting a handgun well is to understand that you can’t hold the gun perfectly still. It’s hanging out there on the end of your arms and it’s going to move. Keep the sights aligned and let the entire handgun wobble as you increase trigger pressure. Practice to make the cone of wobble smaller and try to keep it on the target.

If the sights are aligned properly and the handgun is pointed at the target when the trigger breaks, the bullet will hit the target. Assuming of course you don’t flinch or yank the trigger.

It’s very trendy in some shooting circles to focus on feeling the reset of the trigger. This is taught in some shooting schools and is often used in law enforcement training. In a lot of magazine and web reviews of new guns the writer will often wax poetic on how “tactile” the trigger reset is with that gun.

If you are waiting to feel the reset, you are shooting too slowly. You know the trigger is going to reset, so let it and concentrate on getting the next shot off with precision. Do not worry about feeling the function of the handgun’s mechanics.

I have thousands of photos of the top pistol shooters in the world that I took during the heat of world-class competitions. Their finger is off the trigger between shots. They may say it’s not, but the photos don’t lie. The best shooters never worry about the reset, they just get their finger forward enough, so the trigger can reset and then they break the next shot. Trying to “feel” the reset is just wasting time.

You have a lot to think about when shooting a handgun, but the trigger reset should not be on that list.

How To Choose Your First Handgun

The Proper Ear Protection for Shooting Your Firearms

Introduction to Range Safety and Etiquette

About The Author: Bryce M. Towsley has been writing about guns for 36 years and has published thousands of articles in most of the major firearms magazines. He has hunted all over the world and is a competition shooter in several disciplines. Towsley has several books available on guns, shooting and hunting as well as an adventure novel, The 14th Reinstated. Signed books are available on his website.

How to Catch Really Big Fish With Kids

Scent Control—How To Create A Strategy To Fool More Deer