Shooting a tiny jig to the far recesses under a dock is the best way to load up on slabs once autumn arrives. Here’s how “Mr. Crappie” does it. 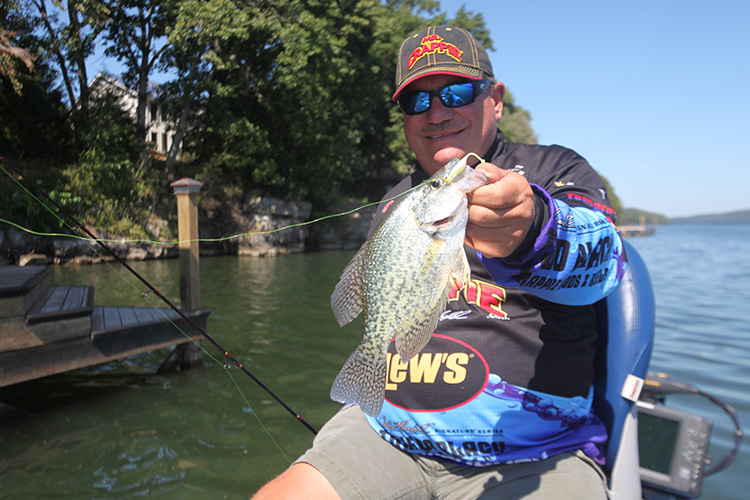 Photograph Courtesy of Wally Marshall, mrcrappie.com
Some of the biggest crappies of the year are caught in the fall, when they’re fattening up on young-of-the-year baitfish such as shad.

Crappie fishing is often associated with open water, cane poles, live minnows and brush piles, but by the time autumn arrives the popular panfish have switched their preferences to shorelines, shady docks and small jigs. The main reason is that young-of-the-year baitfish and sunfish use docks for cover, especially those whose owners have deposited brush piles and other fish-holding attractors under them.

Getting to the crappies that forage around docks isn’t a matter of simply using a pole with a minnow for bait. For one thing, crappies usually hold in the hard-to-reach dark spots where only precise casts with small, bite-size jigs will entice strikes.

Texas crappie specialist Wally Marshall or “Mister Crappie”  as he’s known in the crappie-fishing world, has made a science out of enticing crappies from underneath docks and employs a fishing method called “shooting” to reach them. Basically, “shooting a dock” means using an underhanded bow-and-arrow cast to send a tiny jig into a crappie’s lair from up to 30 feet away.

Crappie-Fishing Tips To Live By

1. Fish Into Cover: On shady days, crappie will be above cover or shallow in the water under cover such as docks. On sunny days, it’s just the opposite. If you’re trolling over brush on a sunny day, you’re not going to catch much until you stop and fish down in the cover.

2. Go Small: The most important thing about being a crappie angler is downsizing jigs from 1/16- to 1/32-ounce and slowing down presentations when the water temperature is below 57 degrees. Crappies don’t move as fast, and they don’t eat as much.

3. Get Reading: Learn how to read side-scanning sonar and understand what you’re looking at under docks. When you catch a fish, stop at some point and see what the fish look like on the screen of your sonar. Crappies tend to stack up in sort of Christmas tree-shaped school.

4. Use Your Hands: When you shoot a jig under a dock or other cover, always close the bail with your free hand. Don’t use the handle to close the bail because it will throw a loop in the line and it will eventually snarl on the spool.

5. Jig Up: Crappies might rise in the water to take a bait, but seldom will descend to feed. It’s best to keep a jig up in the water column rather than bouncing it along the bottom.

“Anybody can cast a jig in open water and wind it back in, but most of the crappies you’re fishing for have already been caught by somebody else,” Marshall says. “The fish that are hard to get to aren’t easy pickings, but if you can put a jig in front of them, you’ll catch them.”

Photograph Courtesy of Wally Marshall, mrcrappie.com
It’s best to use a monofilament or fluorocarbon line that is bright enough to be seen in the shade of a dock. If you see the line hop or move off to the side, set the hook. 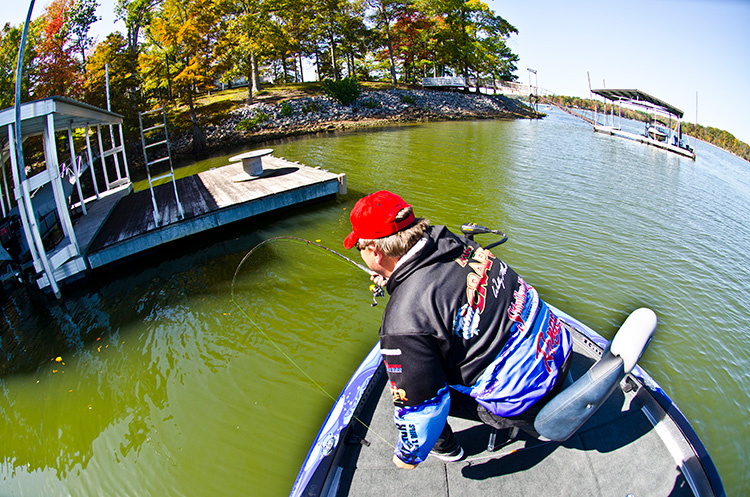 Photograph Courtesy of Wally Marshall, mrcrappie.com
Wally Marshall in the act of firing a small jig under docks where crappies lurk. The trick is to keep the jig as parallel to the water as possible so that it doesn’t land short.

When Marshall targets docks, his approach is always the same. He’ll first get on his computer and use Google Earth to show him where the docks and bridges on a lake are located. Then he compares what the computer indicates with the bottom configurations shown on a lake map. If a river or creek channel swings in close to a dock or bridge piling, all the better.

“I like 8 to 10 feet of water under a dock, and if you’re lucky enough to find a dock with a creek channel underneath, it’s awesome,” says Marshall.  “I want a big dock because I’m going to fish the areas of it that the sun never reaches. That’s where the crappies are, waiting to pick off minnows and threadfin shad that go by. The shade is all the cover they need.

“I look for the darkest corner of the dock—never the sunny side. Docks low to the water, or covered boat slips with jet ski lifts or pontoons, make excellent cover for crappies. What I like to do with pontoon boats is load the rod up and shoot the jig between the pontoons up under the platform, beside the motor and the side of the pontoon. I shoot it on each side of the boat and underneath.”

So easy to say, so hard to do; putting a small bait in front of a crappie in such close quarters requires good hand-eye coordination and aerodynamic baits. Marshall almost always winds up using one of two types of jigs: the sort that might have split tails or a single tail, such as those offered by Strike King, YUM and Gene Larew (Bobby Garland series). His favorite offering is Strike King’s ShadPole, with its flat body that tapers to a single tail with a small knob on the end.

“The reason I like the ShadPole is because it’s streamlined and can go far, or it skips well when I need it to skip up under a dock a ways,” says the Texas fisherman, who favors the basic shad-colored tails unless the water is stained, in which case he dabbles with wilder colors such as hot orange or chartreuse blends. The right color can make a big difference between success and failure.

The jigs he uses have built-in action that kicks in as they fall in the water column. Crappies waiting in a shady spot to ambush juvenile threadfin shad don’t need much encouragement, and might be turned off by a bait that has too much action. A 1/32-ounce head is Marshall’s pick on warm autumn days, and he likes a 1/16-ounce jig in cooler weather because it falls slower, which matches the temperament of the crappies.

“Depending on how dark it is under a dock or pontoon, crappies will be fairly close to the surface,” notes Wally. “Once that jig falls in there, you don’t have to do much except watch your line. If it hops or darts forward a little, lift the rod and set the hook.”

Photograph Courtesy of Wally Marshall, mrcrappie.com
Sometimes, skipping a jig across the surface is the best way to hit a target far underneath a dock.

Marshall reckons he’s shot crappie jigs many millions of times during his life. If you don’t have that much time to spend on the water, at least practice in your backyard until you become sufficiently proficient.

1. “Put an ice chest or box 10 feet away, sit in a lawn chair with your rod and reel, and start shooting a crappie jig at the target,” Marshall suggests. “The trick is to stay low and as parallel to the ground as possible.

2. Once you get good at close range, move the target out some.

3. When you get really good, swap the box for a chair, and start trying to get the jig to go under the chair to the far side.” Starting out, better make sure it’s a big chair, preferably a taller barstool, with lots of space underneath.

Line: 4- to 6-pound-test Mister Crappie High Viz, a chartreuse/yellow blend that stands out under dark docks

Photograph Courtesy of Bobby Garland Crappie Baits
No color is too wild for undercover crappies, though sometimes a jig color that suggests a shad or bluegill will draw plenty of strikes.

How To Choose The Best Times To Fish

How To Catch Really Big Fish With Kids

About the Author: Colin Moore is an avid bass fisherman who has had the opportunity to fish some of the best bass fisheries in North America, with some of the best bass anglers. Formerly, Moore was executive editor of Bassmaster magazine, the bass fishing columnist at Outdoor Life and editor in chief of FLW Bass Fishing magazine. Now editor emeritus of the latter, he continues to write about all things bass fishing.

5 Awesome Campgrounds for Families in Nevada