Over a century old, but still a favorite among shooters. 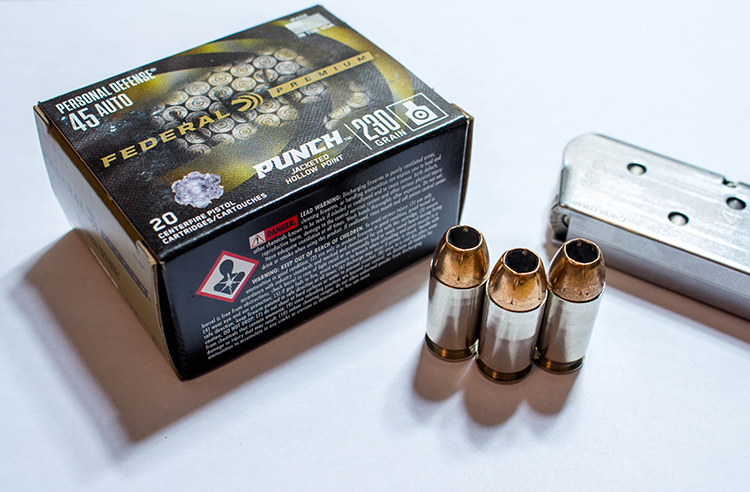 Photograph Courtesy of Philip Massaro
The venerable .45 ACP as loaded in the new Federal Punch line is a great blend of an older design and newer bullet technology.

When choosing a handgun cartridge, you will find all sorts of choices, from the .22 rimfires to the .32s, 9mms, .38 Specials and .357 Magnums up through the .40 S&Ws and .41 and .44 Magnums, but the .45 ACP still remains on the top of the pile. Why would the shooting world continue to embrace a century-plus-old cartridge? What is it about the .45 ACP that keeps so many shooters reaching for it day in, day out, year after year?

It Began with a Browning 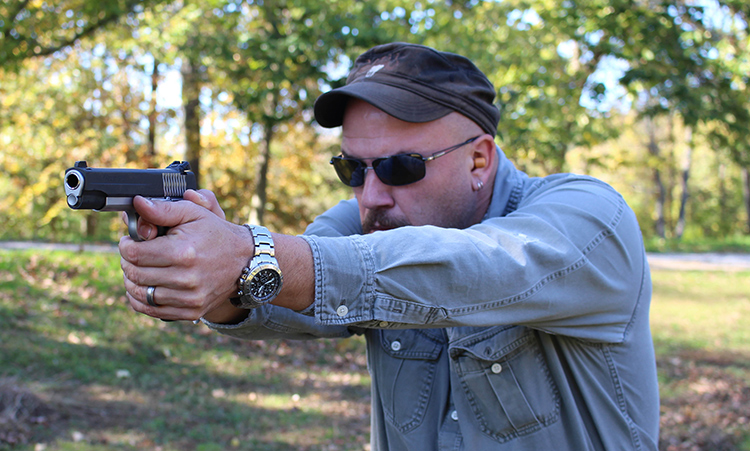 John Moses Browning, the famed firearm inventor responsible for so many excellent designs, both civilian and military, developed a cartridge in 1904 for his prototype autoloading pistol. That prototype was designed for presentation to the U.S. Army as it conducted trials for a new sidearm. Browning, whose firearm legacies range from the single-shot Model 1885 Winchester to the famous “Ma Deuce” .50-caliber Browning Machine Gun (or BMG for short), is known for the brilliant simplicity of his designs, and his .45 ACP cartridge certainly falls under that heading.

The .45 ACP—ACP for Automatic Colt Pistol and named after the handgun Browning—is a rimless, straight-walled cartridge that uses the case mouth for headspacing. This conformation allows the cartridge to feed smoothly from a magazine yet extract easily. The early military trials it won proved this point; the pistol Browning designed for those trials, the M1911, fired over 6,000 rounds without a single malfunction.

Replacing an Army’s Revolvers of Old

But why, exactly, was the U.S. Army shopping for a new cartridge/pistol combination? Perhaps shedding a bit of light on that will help explain just why the .45 ACP is what it is.

The Army’s sidearm of choice from 1873 to 1892 was the Colt Single Action Army revolver chambered in .45 Colt. That gun was replaced by Colt’s M1892 revolver in .38 Long Colt, but its performance (or lack thereof) in the Philippine-American War saw the .45 Colt brought out of retirement. Simply put, the lesser throw weight and slower velocity of the .38 Long Colt wouldn’t stop the Moro warriors of the Philippines, and the Army quickly realized they needed a heavier cartridge.

Browning, whose career spanned from 1878 to 1926, an era that saw a huge shift in firearm and cartridge technology, remained a cutting-edge designer to the end of his days. With the creation of the .45 ACP, he had essentially designed a cartridge that mimicked the excellent performance of the .45 Colt, but in a round could now be fired from a compact, semiautomatic package.

That pistol/cartridge combo remains a sound choice to this day—I carry a 1911 in .45 ACP daily.

Browning’s .45 ACP came very close to providing the same ballistic formula that the larger, rimmed .45 Colt did. But where the older cartridge drove a 255-grain lead bullet of .452-inch diameter to a muzzle velocity of right around 850 fps, the new .45 ACP used a 230-grain bullet of the same diameter that flew at 830 fps. As our military had come to rely on the larger frontal diameter of the .45-caliber bullets those many decades ago, it also came to enjoy the rapid fire and repeatability of the M1911 pistol. It provides what I consider to be the consummate blend of horsepower (read kinetic energy) and ease of shooting of any cartridge developed for an autoloading pistol, ever.

The 9mm versus .40 versus .45 argument has raged for decades now—people, after all, are entitled to their preferences—and while I don’t see an end to that anytime soon, I can say this: Only one of the trio has won two World Wars, not to mention the time served in Korea and Vietnam. The formula of the 230-grain full metal jacket bullet at 830 fps is just one of the options available to today’s shooter; while it most certainly still works, there are many more configurations on the market.

A Well-Rounded Choice for Today’s Shooter 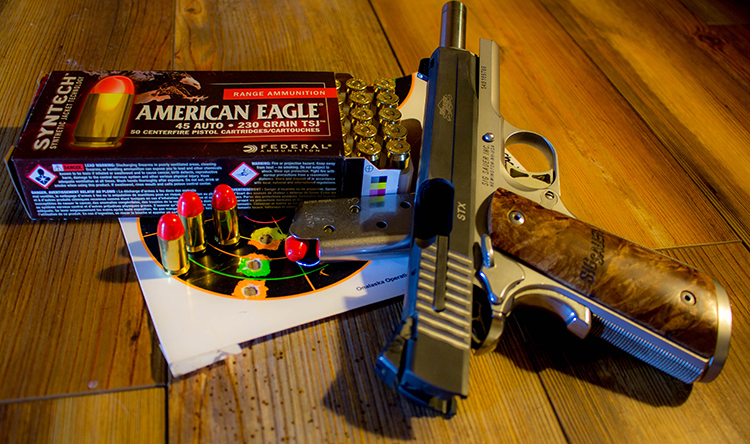 The Hague Convention precludes soldiers from using expanding bullets in battle, hence the popularity of the 230-grain full metal jacket bullet. But we civilians have all sorts of wonderful expanding bullets from which to choose. Federal’s Hydra-Shok, the darling of law enforcement, and HS2 brands, Winchester’s Defender, Speer’s Gold Dot and Gold Dot2 and Hornady’s XTP are all proven designs that perform as necessary in an array of defensive situations.

Equally balanced are a good number of affordable practice and target loads. I love Federal’s SynTech coated-lead projectiles, for instance, which I find to be a sound choice for high-volume training and plinking sessions. Winchester’s copper-coated full metal jackets in the white USA box also keep things affordable for target shooters, and there are plenty of others.

The M1911, the pistol that changed the shooting industry, is also not the only choice for shooting the .45 ACP. There are Glocks, Rugers, Remingtons, and Tauruses, among many more, not to mention the pistol-caliber carbines and other shoulder-fired firearm designs that take full advantage of the .45 ACP’s potential.

The .45 ACP is World War I technology, and some would say has had its time, but here we are, over a century since its inception, still relying on the performance of John M. Browning’s brainchild. I’ve taught many people new to the world of handguns how to safely handle, load and shoot both revolvers and semiauto pistols, but I've never found one who couldn’t handle the recoil of a suitable.45 ACP load. I can’t say the same for the .357 Magnum, .44 Magnum or 10mm Auto.

With a bullet range from 120 to 255 grains, all sorts of differing power levels and bullet constructions to choose from, as well as one of the largest number of component bullet choices available to the handloader (everything from cast bullets to bulk FMJs and highly specialized designs for hunting and self-defense), all in a platform which has been the basis for so many custom handguns it’s little wonder why a cartridge with these attributes has remained at the top of the heap since William Howard Taft was president. And all of that history! The .45 ACP is Iwo Jima, it is Anzio, Salerno, Utah Beach and the Ardennes, it is Dien Bien Phu and Bonnie & Clyde, it is the St. Valentine’s Day Massacre in Chicago and it is Flanders. From the M1911 to the Thompson sub-machine gun, it embodies American ingenuity and the genius of John M. Browning. Long live the .45 ACP.

About the Author: Phil Massaro is a freelance author and editor-in-chief of Gun Digest Annual. He is happiest hunting the wildest places left on earth.

How To Shoot Big Game Accurately at Long Range

Youth Trap—How to Join In the Fun Right Now

What Makes a Good Deer Bullet?